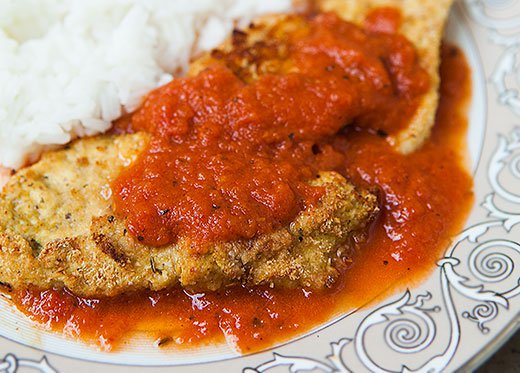 Slice the chicken against the grain into strips. Serve at once with the peppers and onions, some warm tortillas, and sides of shredded cheese,

Yay, chicken fajitas! So easy to make, and so quick. A little bit of back story. The word “fajita” means “little belt” from “faja” for strip or belt, and the diminutive “ita”. It describes a skirt steak, and fajitas were traditionally made with grilled skirt steak, though now they can be made with chicken, shrimp, you name it. The method is to quickly sear the meat on a griddle or grill, slice and serve with quickly seared peppers and onions and flour tortillas. Now with a skirt steak it makes a lot of sense to quickly sear the meat and cut it against the grain to serve. You want the steak to be rare in the middle. But with chicken? Not so much. Rare is not good for chicken. A way to get around this is to either cut the chicken in strips to begin with or to start with thinner pieces of chicken. We prefer to start with a thinner piece of chicken, that way it’s less likely to dry out. Rather than thinning the meat with a meat pounder, we slice the chicken breasts horizontally. The cutlets are then marinated in a spicy marinade with chili powder, cilantro, and jalapeño, seared on a hot cast iron pan (you could also easily use a hot grill), and after resting a few minutes, sliced against the grain. The peppers and onions are cooked in the same pan while the meat is resting. Read more: http://www.simplyrecipes.com/recipes/chicken_fajitas/#ixzz3wsQFjGyS

1 Chicken breasts come in different sizes. If you have chicken breasts that are around a half pound each or more, you will want to slice them in half horizontally, so that the center thickness is around 1/2-inch to 3/4-inch thick. (We do not recommend pounding the chicken breasts, doing so will not result in the right texture/consistency for fajitas.)

2 Mix all the marinade ingredients together in a glass or plastic container. Add the chicken, mix well, cover and let marinate at room temperature for 1 hour. (You can marinate them in the refrigerator for up to 8 hours, but remove them an hour before cooking so that they can come closer to room temp.)

4 Heat a large cast iron frying pan on high heat for 1 to 2 minutes. Add a tablespoon of canola oil (or other high smoke point oil) to the pan. As soon as the oil begins to smoke, lay the chicken breast pieces in the pan. Depending on the size of the pan, and if you have had to cut the chicken breasts, you may have to work in batches. Let the chicken cook undisturbed for 2-3 minutes, until you have a good sear. Once seared well on one side, turn the pieces over and cook for another 2-3 minutes until well seared on the second side.

5 Once seared on the second side, remove to a cutting board and cover with aluminum foil to rest for 5 minutes. Here’s a tip. Stack the seared chicken breasts and then cover them in foil. Together they will retain heat better as you cook the peppers and onions. If you want to test for doneness, cut into one piece with the tip of a sharp knife. It should be just done, if not, you can put it back in the hot pan for a minute or two.

7 Slice the chicken against the grain into strips. Serve at once with the peppers and onions, some warm tortillas, and sides of shredded cheese, 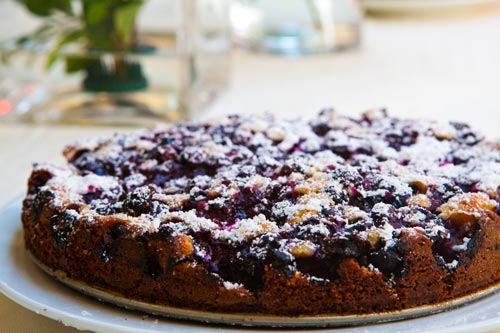